Drunk driving has been called an epidemic in America, and for good reason: There are more people who have confessed to driving drunk than there are residents in the state of Texas! It seems that many people feel like they can function just fine behind the wheel after they’ve had too much to drink, but these scary statistics from MADD prove otherwise.

There Are Many Impaired People on the Road

It’s estimated that there are 300,000 drunk drivers on the road at any given time of day. People are four times more likely to drive drunk at night. 29 million people have admitted that they have driven while intoxicated. Males between the ages of 24 and 29 are the most likely to get arrested for DUI. 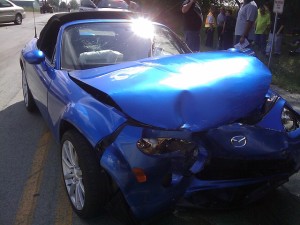 Most Drunk Drivers Are Not Arrested

Studies and polls have shown that, even though their licenses were suspended, drunk drivers keep on driving. Many continue to drive drunk, though there are modern deterrents, such as blood alcohol level monitoring devices that do not allow someone to start their vehicle if they are too drunk.

Injuries and Fatalities Are Common

A person is injured in a DUI-related accident every two minutes. Every 53 minutes, one of those people dies from their injuries. Countless people have lost their lives in the past decade, just because someone who wasn’t sober got behind the wheel. Other motorists are the most likely to be involved in an accident, but pedestrians and bicyclists are also common victims.

Drunk Driving Will Most Likely Affect You

Look at the people on your left and right. Two of you will be involved in an alcohol-related accident in your lifetime. It doesn’t matter if you refrain from drinking; the guilty party could be another driver, an unruly passenger, or a drunk pedestrian who isn’t watching where they are going.

We at Express Auto and Emissions want you to always stay safe on the road. If you have questions about our products and services, please give us a call today!