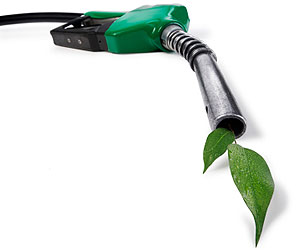 Natural Gas: One of the cleanest burning fossil fuels, natural gas is comprised mostly of methane. There are two forms of natural gas—compressed natural gas (CNG) and liquefied natural gas (LNG)—both which can be used to fuel cars. It is less expensive than gasoline and produces significantly less smog-producing pollutants, but it isn’t as readily available and gets fewer miles to the gallon.

Hydrogen: This fuel can be used in fuel cells to power electric motors or it can be burned in an internal combustion engine. This fuel is probably the most environmentally-friendly because it doesn’t emit any air pollutants or harmful gases. Another advantage to hydrogen is that is can be produced domestically.

Ethanol: This renewable fuel is an alcohol made from plant materials such as grasses, corn, and sugar cane. Ethanol is commonly used as an additive in gasoline and over the last decade, the use of ethanol as fuel has dramatically increased in the United States. Most gasoline sold in the U.S. contains up to 10% ethanol, but it varies by region. It is believed that ethanol will decrease the dependency on oil and reduce greenhouse gas emissions.

Propane: This gas isn’t just for grills; it can also be used to power internal combustion engines without degrading vehicle performance. The emissions propane creates a less harmful than gasoline and is a less expensive fuel source. But like natural gas, propane gets less miles per tank of fuel and is not as readily available.